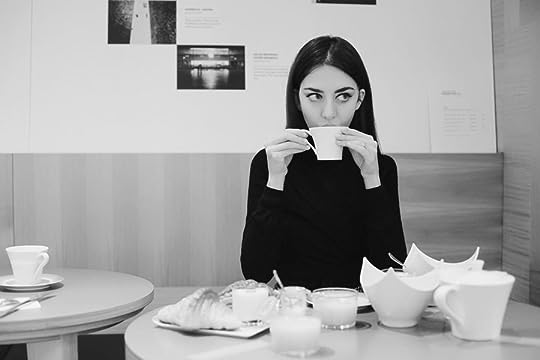 The narrator (let's call him Santiago) recognizes Andrea has arranged everything in her apartment beautifully, all in perfect compact order "like a visible affirmation of her soul." Poor Santiago, It offends his sense of decorum and runs counter to his aesthetic standards to intrude on the elaborate order a woman like Andrea has established in her own gracious flat. I mean, take a look at the above photo. Can you imagine how a man like Santiago must feel living in petite Andrea's apartment?

Santiago doesn't hold back; he lets Andrea know the reasons he's writing her: "because of the rabbits, it seems only fair to let you know; and because I like to write letters, and maybe too because it's raining." OK, at this point we as readers can appreciate Santiago's enjoyment in writing a long letter on a rainy day. But what about Santiago's sense of fair play about, of all things, rabbits? Sounds weird as hell.

Oh, yes, Santiago and his rabbits. He informs Andrea he occasionally vomits rabbits - and just did vomit a tiny white rabbit while taking the elevator up to her apartment for the first time. Not to worry about the rabbit - he's keeping it safe in her wardrobe in the bedroom. Sara don't know (Sara also lives in the apartment but at no point does Santiago develop any sort of relationship with Sara).

Four days pass and Santiago has four rabbits to deal with: one black, one grey and two white. Miraculously, Sara still doesn't know since Santiago is preoccupied with caring for the rabbits which, unfortunately, has him turning all hard inside like the starfish Andrea has placed above her bathtub. And then, uh-oh - Santiago's rabbits now total ten. The rabbits sleep during the day when Santiago is off at his office doing his translating work. Then at night, he cares for them and makes sure all ten rabbits don't break anything in the apartment with all their hopping around.

"A bit of white on the page will be all you'll have to represent the bridge, hardly a period on a page between yesterday's letter and today's." Santiago picks up writing when things both in the apartment and in his head have transitioned into another phase. To say anything more would be to say too much.

What to make of all of this? We are well to keep in mind a main preoccupation for Julio Cortázar - the dynamics of what it means to translate, things like a writer translating experience into words or a translator taking someone else's words and rendering them in another language.

And we have the whole issue of creativity. Are those rabbits what any creative artist or writer must deal with in their life? The artist moves and lives within the everyday, routine world and then up comes a rabbit, propelling the artist to, in effect, live in a second world filled with the crazy hopping rabbits of artistic or literary inspiration.

Dealing with the world of the mundane and the world of rabbits can drive a creative artist to the wall. Just think what might happen if someone like Santiago must deal with not ten but eleven rabbits. They might be driven not only to a wall but thrust well beyond the wall.

Letter to a Young Lady in Paris is included in two different collections: Blow Up and Other Stories and End of the Game and Other Stories, and also can be read online: http://mrcampbellrocks.com/letter-to-...

“Andrea, I didn't want to come live in your apartment in the calle Suipacha. Not so much because of the bunnies, but rather that it offends me to intrude on a compact order, built even to the finest nets of air, networks that in your environment conserve the music in the lavender, the heavy fluff of the powder puff in the talcum, the play between the violin and the viola in Ravel's quartet." - Julio Cortázar, Letter to a Young Lady in Paris