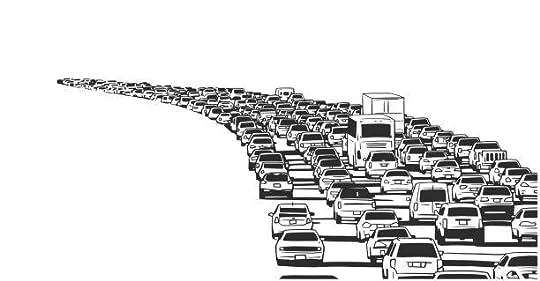 The Southern Thruway - Argentine author Julio Cortázar's 1967 short story about motorists returning to Paris on a Sunday afternoon stuck in a hellish traffic jam along a main highway in the blistering  heat of August.

"At first the girl in the Dauphine had insisted on keeping track of the time, but the engineer in the Peugeot 404 didn't care anymore." The story's opening line sets the tone - not once are any of the men and women called by name; rather, they are identified only by occupation and the make of their car - Caravelle, 2CV, Peugeot 203, Taunus, ID Citroën, Simca, Corbeil, Juvisy, Volkswagen, Fiat 600. Although the engineer in his Peugeot 404 is the main focus, it's as if the objective third-person narrator has a reader sweating and sweltering in their own car, say a Fiat 124 Sports Spider, surrounded by all the other cars and drivers.

Of course, it goes without saying, everything in our modern society happens for a reason. Following this ironclad logic, after hours of sitting at the wheel enduring nearly unendurable stop and go traffic, all lanes come to an abrupt stop. Why?? Everybody needs to know the reason. Rumors pass from car to car: a colossal multi-car accident, an overturned bus, a Piper Cub crashed in the middle of the highway. Actually, in the end, attitudes resemble the American tourist’s in his De Soto who doesn’t give a damn about the Piper Cub or any other wreckage – just fix the problem so we can get moving!

We observe various transitions in the engineer and others around his car as the traffic jam extends from hours and days into weeks and months – oh, yes, summer turns into fall turns into winter wherein we find not so much a group of drivers and passengers as a commune sharing food and clothing and dealing with such challenges as personal hygiene and sickness, occasional outburst of anger and violence, deep feelings of love and respect for each other as well as the cycle of life and death.

But then suddenly it happens during the spring “when nobody expected it anymore.” Traffic begins to move, slowly at first and then progressively faster and faster. The engineer drives along in his Peugeot 404 and attempts to locate the others in his commune, especially his lover, the young girl in her Dauphine. But, alas, with all six lanes of traffic moving at thirty and then forty and then fifty, all the men and women and kids he has come to know and love are separated forever.

Gone are the councils to make decisions, gone is the children’s laughter as they play their games on the back seat, gone are the sweet caresses from Dauphine during the night. All is returned to speed and everyone looking ahead, not bothering or caring about all those in front or back or on either side, only concerned about having the trip over and getting to their Paris destination. The story’s concluding line: “And you moved at fifty-five miles an hour toward the lights that kept growing, not knowing why all this hurry, why this mad race in the night among unknown cars, where no one knew anything about the others, where everyone looked straight ahead, only ahead.”

In Blow Up, his short story made famous by film director Michelangelo Antonioni, Julio Cortázar refers to a car as "that wretched, private cage." We are well to keep this reference in mind when reading A Southern Thruway. My sense is Julio thought long and hard about what is lost when an entire world society transforms itself by placing the automobile at its center. What are the consequences of spending hour after hour in a 'wretched private cage' separated from others? Is the richness of life stripped away when we no longer think in terms of journey but only destination? A Southern Thruway is a superb story for such philosophical reflections. Highly recommended.

The Southern Thruway is included in All Fires the Fire and Other Stories and can also be read online. Link: https://latinamericanshortstories.fil... 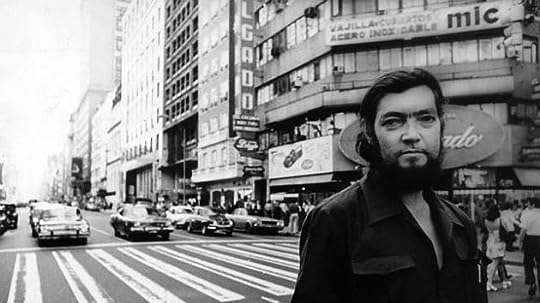 "All was gasoline fumes, screechy screams from the boys in the Simca, the sun's glare bouncing off glass and chrome frames, and to top it off, the contradictory sensation of being trapped in a jungle of cars made to run." - Julio Cortázar, The Southern Thruway