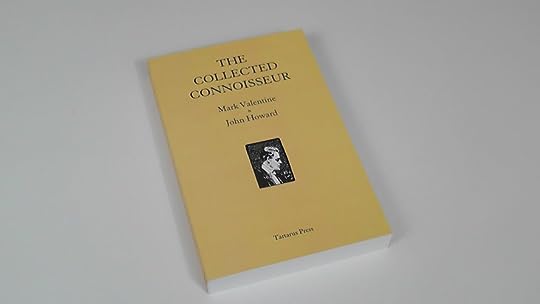 Hail to Tartarus Press! This book is a work of art - the finest binding and printing a connoisseur and lover of literature will ever have the pleasure of owning. Holding a work published by Tartarus Press almost makes my fingers and hands tingle. Among the tales of the supernatural and fantastic in the Tartarus collection are those penned by Mark Valentine, an author I've come to treasure, this particular title most especially.

The Collected Connoisseur - a series of tales where Valentine recounts conversations with a suave gentleman only referred to as The Connoisseur, a personage by no means wealthy and who shuns contrivances of modern living in order to indulge his pleasure in all things relating to literature and the arts, a gentleman of personal discrimination who can be seen as a "connoisseur of the curious, of those glimpses of another domain which are vouchsafed to certain individuals and in certain places."

Of course, these tales are fiction not fact. However, as the saying goes among lovers of novels and short stories, words I have always taken to heart, fiction, so called, is truer than truth. So, in the spirit of this splendid spinner of tales, I offer the following glimpses into three of Mark Valentine's polished gems. (Note: Mark enlisted the help of his good friend and fellow author John Howard in compiling the tales herein).

EFFIGIES
The Connoisseur relates his traveling to the remote cottage of Austin Blake, a skillful maker of ceramic pottery. When The Connoisseur presses Blake as to why he retired from engaging in his art, Blake opens a cupboard whereupon The Connoisseur's eyes behold:

"Shelf upon shelf was stacked with the work of many hours - yet these were not the lucent,  lovely creations that had earned him such fame, but withered black abstracts which each seemed a cruel mockery of the human form in torment; dark, foul knots like the twisted boughs of trees which shun the sunlight or the dank eruptions of fungus. they were shapes such as a madman might make who is beyond cure; or, rather, the stumps a demi-urge might leave who had grown tired of trying to create perfect evil."

The Connoisseur takes action, action that places his very person in peril but action needed nonetheless if an equally powerful second transformation is to be effected.

THE PARAVINE CRIES
A tale so appealing, so moving, so telling for those of us dedicated to art, literature and the aesthetic experience, a tale I read over and over, luxuriating in the language, the rich imagery and all things Mark Valentine.

We have the battle repeated again, again and again - on one side there's the hardheaded father, a business type casting himself as the guardian of Respectability (author's caps) forever pursuing business, local politics and other men's wives - thus revealing himself as bloated buffoon and prototypical hypocrite.

On the other side we have his eldest son who "fell under the posthumous spell of the poetry and art of the Aesthetics (again, author's caps), and still more their philosophy, their "religion of beauty." He turned his rooms into a shrine of the exquisite, and received there all those he found soothing or stimulating to his senses or his intellect."

And to add an extra helping of the scintillating, this is a supernatural tale with peacocks. A Valentine not to be missed.

CAFÉ LUCIFER
The Connoisseur recounts his partaking of the rescue and reopening of an architectural rarity that lead him to yet another encounter with the curious and recondite. Regarding the building itself, the architect was Emil Zaska, a Czech émigré, and his creation is far and away the most authentic Cubist construction in all of Britain. The project was financed by Charles Barwick-Fowkes, a wealthy young radical who had a fascination for structures consisting of glass, concrete and metals that would express the potential for pure light, symmetry, color and form.

The name bestowed was Lucifer Hall, a name coming from classical mythology – Lucifer being the name for the planet Venus and personified by a male “light-bearer.” However, so The Connoisseur suspects, the name was also chosen as a deliberate provocation. Be that as it may, the hall became a model of pure line and geometric invention – streamlined, sleek, capturing the most profound complexities of abstract art – and served as “mission headquarters” for the architect’s vision, attracting avant-garde artists, poets, inventors and dancers.

Sadly, when young Barwick-Fowkes died in an airplane crash some time thereafter, the project was abandoned and the building sold under the less eyebrow-raising name of Barwick House to be converted into offices. Then, via a stroke of good fortune, the building was mostly restored to its original design and returned to its intended purpose - mostly rather than completely since a number of things like the unique tables and lamps from the Cubist café are forever lost. The Connoisseur took great pleasure in helping to administer the trust responsible for the rescue of this unique building.

Then it happened: following the project’s completion, while alone in the space that was the café and bathed in the brilliant light from the windows, The Connoisseur was overcome by a strange exultation. He thought initially such a feeling could have been caused by the success of the restoration combined with the intense aesthetic pleasure of being in such a finely conceived design but there seemed to be more to it than that. “As I stood in that triumph of proportion I felt possessed by a – well, a shiver of soaringness, a literal enlightening of my thought, senses, consciousness. I felt extraordinarily in harmony with things, with what I can only describe as a kind of crystalline blitheness. As I gazed around me, I began to sense too something more, some hint of an active force in the elevations of the room and in the directions of the light and in the nodal points where symmetrical shapes met.”

After some time, The Connoisseur begins pacing softly around the room, pausing before each one of the art works placed in the room until he finds himself drawn toward an object on a black plinth – a plain glass sphere somewhat greeny and grainy in tint and inside this sphere is embedded a long prism, refracting bright, sharp light so that “with the effect also of shadows, flaws and curving reflections in the sphere, there was an impression of facing a very singular instrument, enacting rapid mysterious formulae within its depth, well beyond our understanding.” The sphere commands The Connoisseur’s attention for many minutes.

Wishing to read papers providing both the background and details of this mysterious sphere, The Connoisseur races to the stars leading to the office. As he is heading down, he nearly bumps into a slim, dark figure ascending. Once at the office, it transpires that the only information available on the sphere is the note: "Lumina Studio, Prague. Replica of an original Cubist artefact.”

Some days later in the very same room, The Connoisseur meets a well-groomed gentleman with white hair by the name of Edward Cleobury and mentions the remarkable sphere. Cleobury speaks of his past association with the globe of greeny tint and prism as well as his own experiments with "Colour Music," that is, attempts to create symphonies of coloured light. Cleobury goes on to relay his meeting a slim, dark woman with “eyes the most brilliant viridian green he had ever seen and seemed to gleam with an inner intensity that sent shockwaves through his body." But there's more to Cleobury's story as The Connoisseur tells us: "For as he focused on those fountains of green fire, he also saw, within the deep dark core of the pupils, a scintillant glinting as of a prism capturing and refracting light from an unknown source.”

What follows is sheer magic. I can’t recommend The Collected Connoisseur highly enough. How much have I fallen in love with the British author's tales of the supernatural? I myself plan to read and review three other Mark Valentine collections published by Tartarus Press in the upcoming weeks.