Herald of the Hidden and Other Stories by Mark Valentine 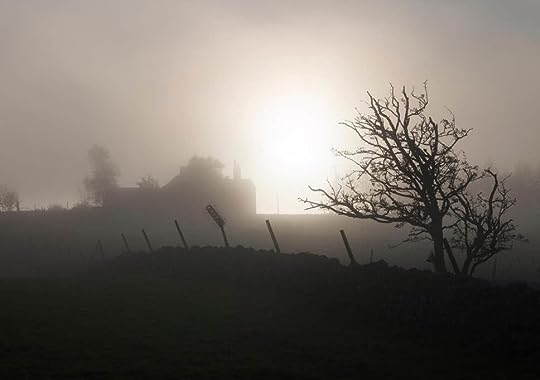 Herald of the Hidden and Other Stories - sixteen tales collected here, mostly written when Mark Valentine was in his twenties and early thirties, ten of the sixteen being “Ralph Tyler Stories,” that is, featuring young Ralph in his role as private detective investigating occult phenomenon. I must say there is an irresistible storytelling charm to be found in each and every one. But enough generalization - permit me to offer a closer look at three stories I count among my personal favorites:

THE FOLLY
Ralph Tyler announces to his friend (the young man narrating this and all other Ralph Tyler stories) they have been summoned by no less a personage than the lady of the manor at Langborough Hall, a lady by the name of Mrs. Helen Arrowden, and for a very specific reason: there’s an old lodge on the property let out to paying guests who visit to take advantage of the amply stocked shooting and fishing amenities - and there's been a series of odd happenings at night inside the lodge, very odd, indeed.

Upon their arrival and in conversation with Mrs. Arrowden, Ralph and his friend learn that during the second night of his stay at the lodge, a man of advanced age was disturbed by what the lady called “hallucinations.” The old man’s third night proved even more disturbing: he claimed he was attacked by a throng of angry woodland beasts that emerged from the walls and lunged at his face and throat. Equally disturbing, upon examination of the room, nightclothes, bedding and the man himself, not one shred of evidence could be detected, not even the smallest mark or scratch.

Unfortunately, the incident could not be ascribed to an oldster’s dementia since subsequent visitors, four in number, reported similar attacks when aroused from sleep in that very same room. As Mrs. Arrowden continues, the tipping point was reached when, unaware of these recent episodes, two hale, hearty, rough and tumble hunters reported: “a pack of hideous creatures had invaded their room in their scores, sweeping all over them, biting, tearing and gnawing at their flesh, filling the place with an abominable stench, and screeching in an ecstasy of glee at their quarry. But this time there was an added refinement: they spoke of the sound of human laughter mingling with the animals’ triumphant cries, and of a low, urging whisper, as if somebody concealed nearby were directing and encouraging the attack, and revelling in their misfortune.”

Does this sound like a room you would care to spend the night? The narrator certainly has misgivings but he also has confidence in Ralph Tyler’s sleuthing abilities. Besides which, he wouldn’t want to miss an opportunity to share in his friend’s adventure.

What adds particular flair to Mark Valentine’s Ralph Tyler stories is the manner in which Ralph conducts his investigations, in this case, making use of Mrs. Arrowden’s small library, listening to the accounts of people familiar with the lodge’s history and, most especially, putting aside conventional aids such as sprinkling of sacred water, burning of candles, performing rituals, to call upon his personal resources – courage and integrity, grasp of logic and depth of understanding coupled with a profound respect for all forms of life, material or otherwise.

HERALD OF THE HIDDEN
Scattered across the centuries, there have been reports of lights appearing in the forest of Solsey at night. Unsolved mystery - just the thing to grab Ralph Tyler's attention.

An engagingly provocative tale from beginning to end. At one point in their adventure deep in the forest, the narrator observes: "There was a slow flapping above us. The starlit sky was a crystalline blue-black. For a few moments I could not see what he (Ralph) had noticed. The twisting of the trees, and the curved fronds of the bronze ferns, did have a suggestion of sentience about them, as if these were living creatures suddenly caught turning from flesh to flora, from blood to sap. I had to stare hard to realize that I was surely only seeing chance resemblances, that these were not really the simulacra of animals. They were just contortions of wood and leaf, not ears, jaws, snots, horns."

This is a mere snippet of what the boys encounter in Solsey. A tale to take your breath away.

GO TO THE WEST
Not a Ralph Tyler story but a true gem from the collection nonetheless, a tale of alchemy, Gnostic wisdom and one devotee’s release from human corporeal brutishness into the realm beyond.

The devotee is Michael Bacon and as he lies on his death bed he has glimpses into nothing less than the eternal, every single glimmer well deserved since he has spent countless years in weary drudgery following his mentor Wilson’s extensive researches on the Gnostic formulae so necessary to effect the desired alchemical transformation enabling one to reach everlasting bliss.

Michael Bacon was even with Wilson during his last hour when the dying wise man exerted enormous effort to articulate his final, critical instruction: ‘Go to the West.’ Now at the hour of his own death, ever faithful to what he knows to be the most exalted wisdom tradition in human history, Michael Bacon confidently follows his master’s instructions right up til his final breath.

But, but, but . . . with his signature suavity, Mark Valentine adds a twist at the end that shifts his tale into one of Lovecraftian cosmic horror. And what is truly remarkable is the subtlety and restraint in the telling. Go to the West is only a fraction of the length of Lovecraft’s The Call of Cthulhu but the depth of universal chaos and dark mortal dread revealed is every bit as shocking. An unforgettable read.

Lastly, it's worth mentioning Herald of the Hidden and Other Stories is a high quality Tartaras Press publication which adds much to the enjoyment of reading.

"The Ralph Tyler stories reflect my affection for the occult detective form, which I'd enjoyed in William Hope Hodgson's Carnacki the Ghost-Finer, in Algernon Blackwood's John Silence, and in the adventures of Arthur Machen's Mr Dyson, for example in The Three Impostors. But I tried to make my character a little different. He isn't prosperous, doesn't have private means, and hasn't been trained with any special knowledge. Sometimes, he doesn't play fair with his clients, or his friend, the narrator. He's not fancy: he smokes foul cigarettes, slumps in his chair, and has a threadbare jacket. And he's from Northampton." -- from Mark Valentine's Introduction